Comments Off on Local News for Summit County

On August 28 Summit Peaks and Riverside Lodges will be hosting the Torreys Peaks climbers for Project 54! Our Lodge goal is to raise $1,000+ for these kids around the world!

Here is a link to see more!

It is an annual fundraising event of the Wilderness Ministry Institute. The goal is to raise money to outfit indigenous youth workers with the needed gear to share the Gospel with underprivileged youth through outdoor adventure.

Along with its nearby neighbor Grays Peak, Torreys Peak holds the distinction of being the only 14,000-foot peak on the Continental Divide. Highly visible from Interstate 70, Torreys is a memorable symbol of the ruggedness of Colorado’s Rocky Mountains for millions of passing climbers and non-climbers alike. Although Mounts Evans and Bierstadt are closer 14ers to Denver as the crow flies, the close proximity of Torreys and Grays to the interstate and a well-trodden path to their summits ensures plenty of climbing activity around the year. While the crowds might create a fun, sociable environment for gregarious hikers, the parking lot fills up rapidly on summer weekends, and it often is standing room-only on the summits of both peaks.

Torreys is a large, complicated mountain with a variety of routes for climbers of many skill levels and interests. The standard route, a walk-up from Stevens Gulch, follows the Grays Peak trail to the Grays/Torreys saddle (13,700 feet), and then ascends Torreys’s south slope. Excellent hiking routes also exist from Loveland Pass to the northwest and Chihuahua Gulch to the southwest. While there are no recognized technical routes on Torreys, this peak is home to several classic scrambles, snow climbs, and ski descents. The class 3/4 Kelso Ridge route ascends Torreys’s northeast ridge in style, with sustained scrambling on clean rock, and an unforgettable knife-edge. The most popular snow climb (and expert ski descent!) is Dead Dog Couloir, with 50° slopes and a convenient finish near the summit.

Many other interesting climbs exist on Torreys’s steep and broken north face, the easiest being the class 2 Northwest Slopes. Emperor, described by Gerry Roach as “one of Colorado’s longest snow climbs”, is the mountaineer’s highlight. These climbs and others start from Grizzly Gulch.

Posted by Justin Patnode on July 19, 2010 in Activities for the Family, Lodge News, Trails and hiking near the Lodges!, Upcoming Events

Comments Off on Summit Peaks and Riverside Lodges Support Project 54

Rivers are looking good this year

Spring snowstorms, cool temps may have ‘saved the day’

“The last couple of snowstorms that we’ve gotten and cooler weather have definitely seemed to save the day,” said Sean Glackin, owner of Alpine Quest Sports in Edwards, which teaches kayaking lessons and sells kayaks.

Local rafters and kayakers hope for lots of snow during the winter, which then melts and provides big, fun whitewater for a lengthy period of time.

While the Vail area saw below-average snow for much of the winter, there were big storms in April. And the cool spring weather ensures a slow runoff, which lengthens the whitewater season.

Through March, local snowpack was tracking at about the same level of the 2001-02 drought year. But, by Monday, the April storms had pushed snowpack levels at Vail Mountain to about twice of what they were in 2001-2002.

That means there is plenty of snow at high altitudes waiting to melt into rivers.

There was 19.3 inches of “snow water equivalent” at Vail Mountain on Monday. The average for that time of year is 23.6 inches.

Kayakers are already navigating Dowd Chute, one of the more advanced sections of the Eagle River.

While this might not be the biggest year of whitewater ever, that might not be all bad, said local kayaker Ken Hoeve. Less violent water can be more friendly to beginner and intermediate kayakers, Hoeve said.

“There’s nothing wrong with low-water years in that it’s better for the average person to go out,” Hoeve said.

He added that many of the local rivers — including the upper Colorado, the Shoshone area near Glenwood Springs, as well as the Arkansas River — are dam-controlled, which ensures high, steady flows for much of the spring and summer.

John Dakin of the Vail Valley Foundation, which puts on the Teva Mountain Games in early June, said things are looking good for the whitewater events.

“Everyone’s feeling pretty good with where we’re at at the moment, and the Mountain Games have certainly run on less snowpack than currently exists,” Dakin said.

Posted by Justin Patnode on May 10, 2010 in Activities for the Family, Lodge News, Upcoming Events

Comments Off on Rivers are looking good this year 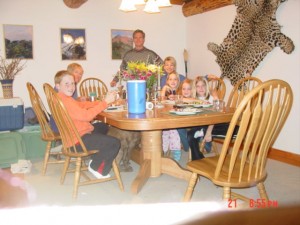 Enjoy your family and friends!

Posted by Justin Patnode on May 5, 2010 in Upcoming Events

Comments Off on Upcoming Summer Events