What Determines The Flow Of the Blue River That Runs Though Our Property? 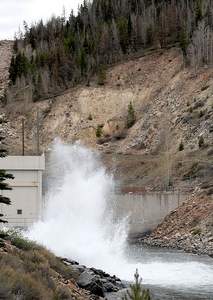 It is important to understand how the water flow in the Blue River is determined. This effects our fishing and rafting in it! The simple guide line is in the Spring and early Summer the flow is generally higher and in Fall and Winter it is less. But when in doubt just check with the Forest Service office about 1 mile North on Hwy 9! Remember, as shown above the Source for the River is a Dam, that is why the River produces HUGE trout and large swings in CFS water flow amounts!

Water from Dillon Reservoir began flowing through the morning glory spillway into the Lower Blue River at 5 a.m. Tuesday. Water spills through the “glory hole” when the reservoir’s water level reaches its full elevation of 9,017 feet.

Water also flows through the waterworks and into the Blue River from the bottom of the dam. The spillway ensures water never flows over the top of the dam.

Outflows into the Lower Blue reached 235 cubic feet per second (cfs) Tuesday, with 220 of that coming from the bottom of the dam. As the snowpack continues to melt, the percentage of water coming from the top of the reservoir, via the spillway, will increase.

Actual peak flows will vary from the forecasts depending on weather: Warm, sunny weather would produce higher peak flows over a relatively short period of time; cooler, cloudier weather — resulting in slower snowmelt — would translate to a lower-

volume peak spread over a longer period of time.

The Lower Blue is generally fine for rafting at flows higher than 500 cfs. To reduce the likelihood of flooding along the Lower Blue, Denver Water tries to ensure that peak outflow doesn’t exceed 1,800 cfs.

“There is always some risk of flooding downstream,” said Denver Water’s manager of raw water supply, Bob Steger. “The reservoir could be spilling, and we could get a bunch of rain. That’s a risk we have every year while we’re spilling.”

“People in Silverthorne still need to be kind of diligent in understanding that anything can happen as far as weather is concerned,” Steger said.

Posted by Justin Patnode on June 2, 2010 in Activities for the Family, Colorado Facts, Fishing around Our Lodges!, Silverthorne Area

Comments Off on What Determines The Flow Of the Blue River That Runs Though Our Property?
← Summit Peaks’ Top 10 Reasons to Visit us for Summer!
Rafting In Summit County 2010 →